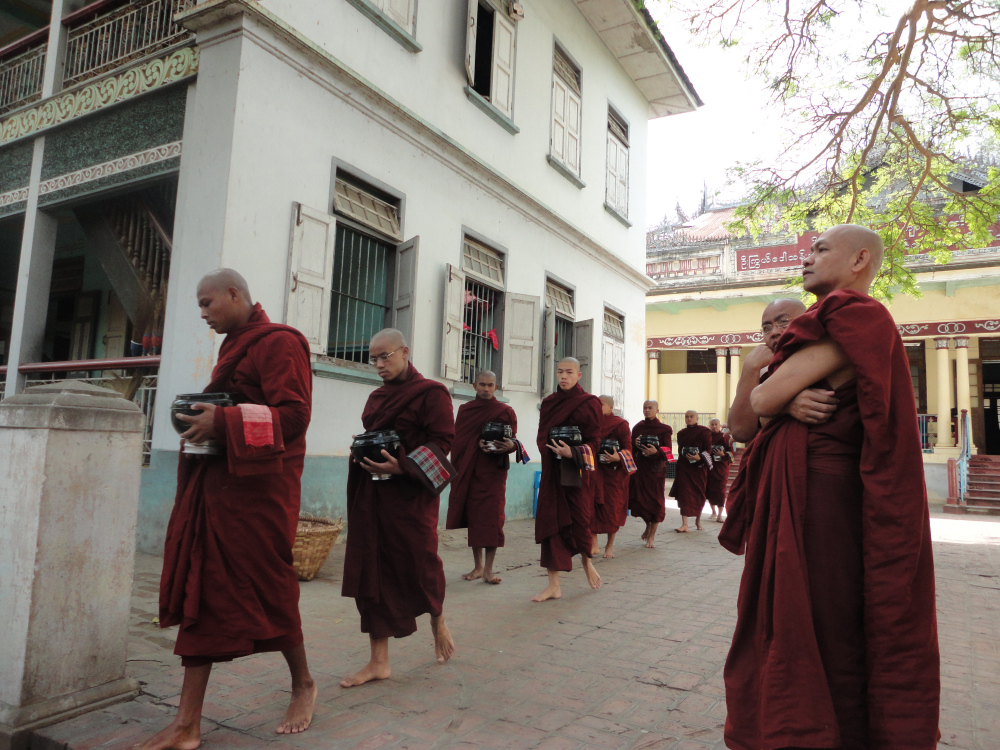 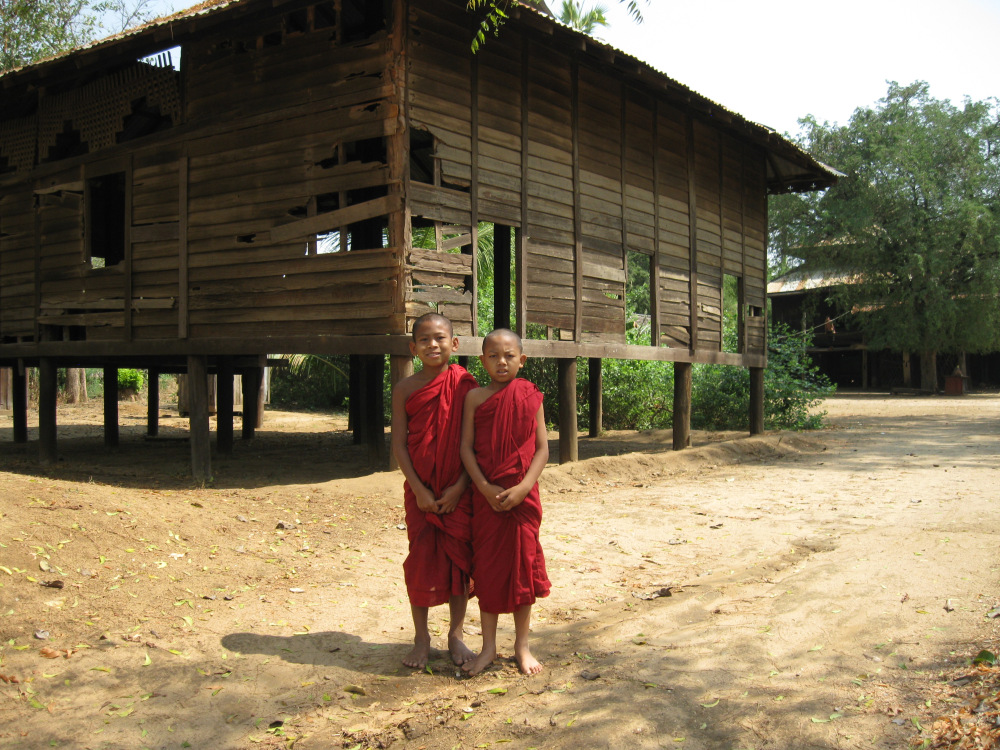 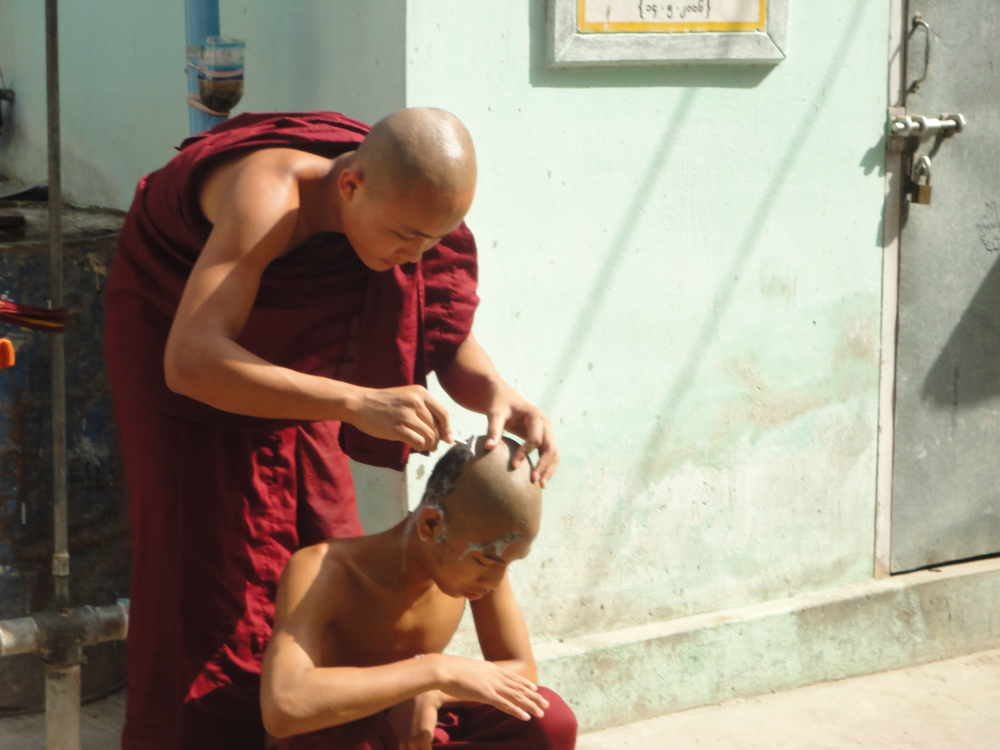 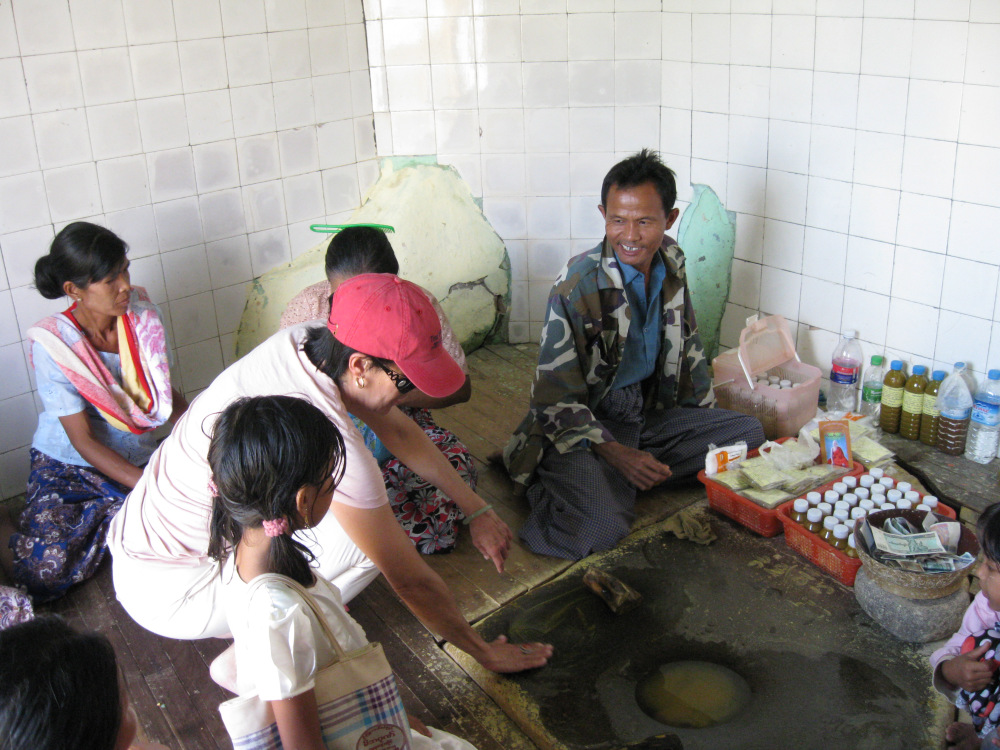 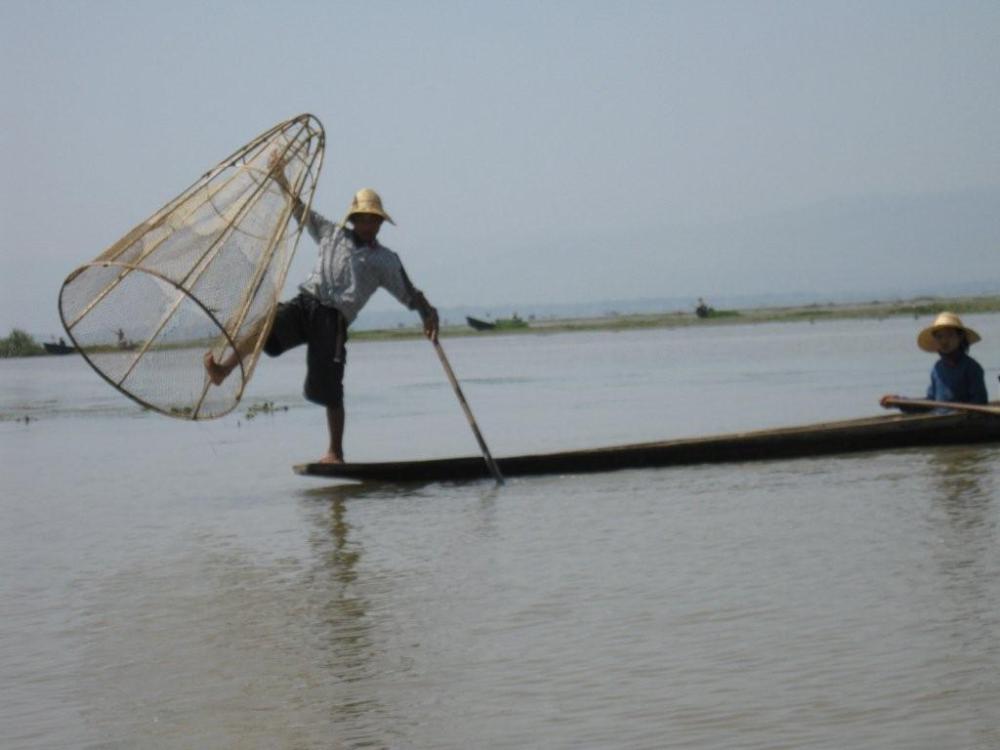 One leg rowing in Inle Lake 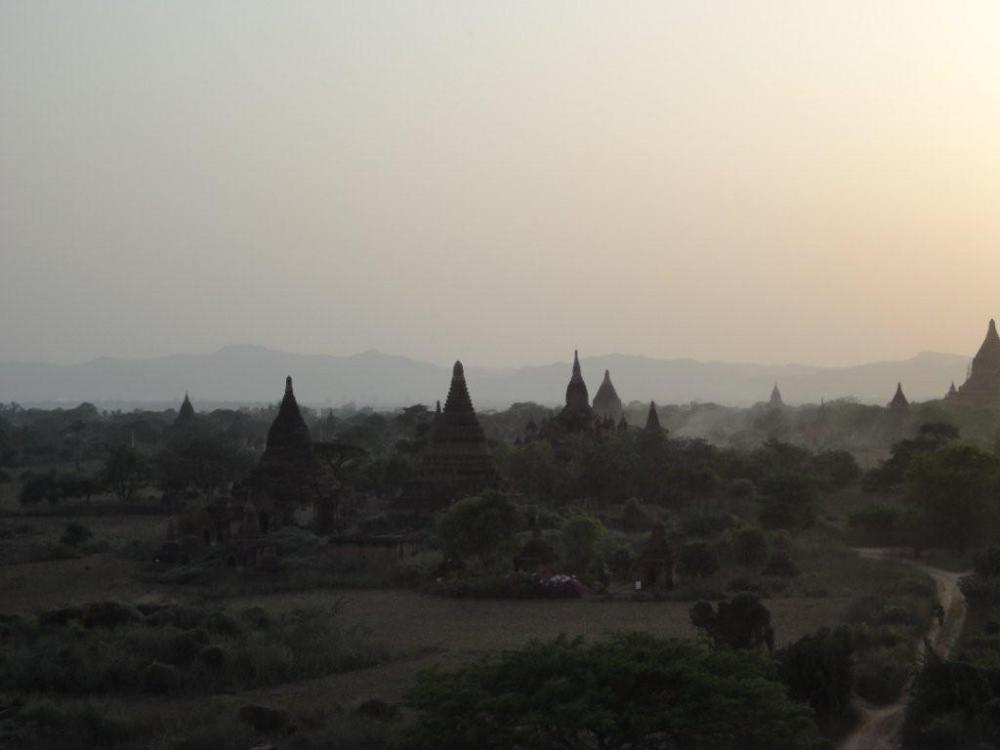 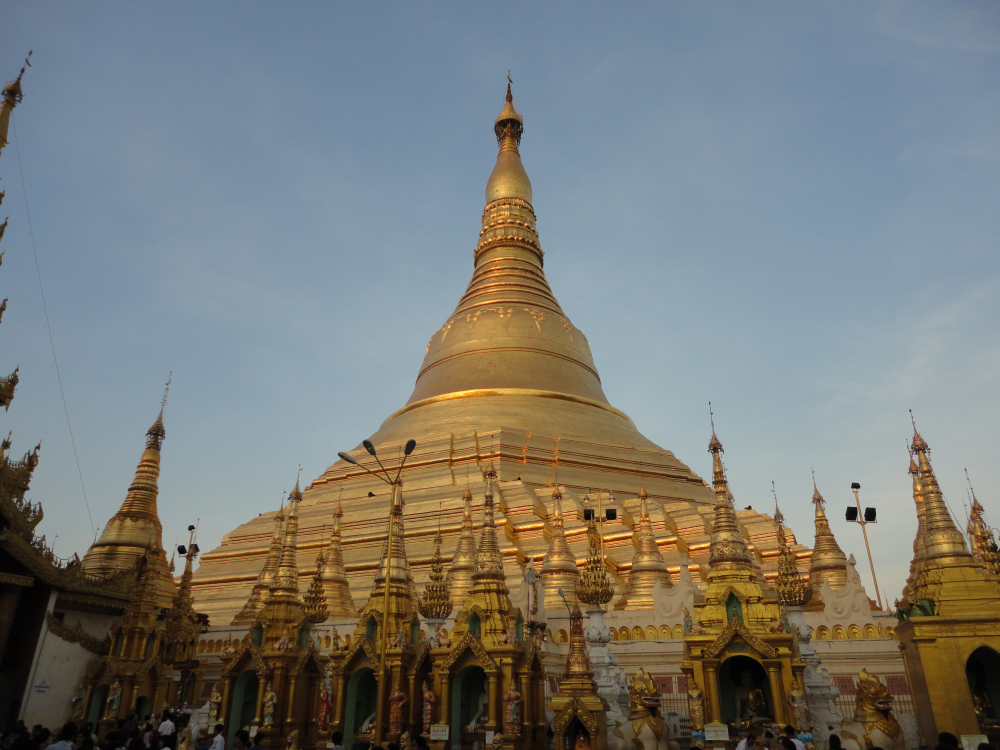 As my flight took off from Laos to bring me to Yangon I was filled with anticipation and daydreaming of the different sites and people I would meet. Myanmar, being much larger than Laos, had peaked my interest ever since I was a little girl and read stories of the country once known as Burma. This mystical  and very spiritual country with it’s grand temples and stupas.The flight was quite pleasant- I connected through Bangkok – and was in Myanmar in no time. I was met at the airport by my guide who would be with me for my entire stay. It was pretty late by then so I went straight to my hotel – The Strand. The hotel reminded me of Old World charm with it’s high ceilings and regal entranceway. My room was very spacious and comfortable. I slept very well.  The next morning, as I sat by the window of the hotel restaurant,  I was able to capture the vibrancy of the city as it was waking up. I was here! I still couldn’t believe it. I almost pinched myself.

The city of Yangon has over four million people and filled with so much history. I met my guide and we began my adventure. As I walked down streets I felt the presence of the country’s faded colonial past. The former Post Office  – a wonderful structure –  was now  the playground for children.  Next my guide had a special treat for me. I was taken to a ceremony for the young boys who were to be initiated as monks. The food, music and people were welcoming and filled with joy for this special event.

Afterwards I visited the Sule Pagoda, walked among locals at the Mahabandoola Park , wondered at the Kyaukhtatgyu pagoda – known for the reclining Buddha that measures 70 meters in length, continued to the National Museum  and Bogyoke Market. I ended my day with a visit to the stunning Shwedagon Pagoda where many locals and Buddhists come to pray. This was truly spectacular! With it’s gold spire reaching so high – it is said this was built  2500 years ago.

Ok, so I had my first taste of Myanmar and loved it and now I ready for more. After an early breakfast I was taken to the airport for my next city to visit –  Bagan. Bagan, formerly Pagan, was the capital of several ancient Burmese Kingdoms. There are approximately 2200 temples remaining in Bagan. It is truly an amazing sight. You could walk for hours and  never tire of these beautiful structures. The temples interspersed with stupas was amazing.  That evening I climbed on top of a Stupa to see the sunset. The views were magnificent! As far as my eyes could see I saw the sun setting over numerous temples and stupas creating quite a vista of colors and shadows. I put away my camera knowing that I could never capture the beauty in front of me. It was indeed a spiritual experience!

My next day in Bagan I was taken to Mount Popa – about 1.5 hour drive from Bagan. Rising 1,518 meters from the plains of the surroundings of Bagan this is considered the sacred home of the spirits. A visit to Taung Kalat temple, which sits atop like a plug in a volcano is home to 37 nats (spirits) of Myanmar, which are displayed at the base of the temple. Once I climbed to the top of  this temple the views were incredible ! They say on a clear day you can see the city of Bagan.  That afternoon a visit to Yoke-Sone-Kyaung is a must. Built in 1882 on the eastern banks of the Ayeyarwaddy River, this monastery is famous for its spectacular wood carvings.

Well, always ready for more, after another early breakfast I was on a short flight to Mandalay. This city remains the economic, cultural and religious heart of upper Myanmar. A visit to Mandalay Hill, home to many religious sites and the memorable views from the 230m high summit then onto the Golden Palace Monastery famous for its teak carvings of Buddhist myths. Ending the afternoon with a stop at the Kuthodaw pagoda built in 1857 and home to the world’s largest book  and Maha Muni pagoda which is regarded as the holiest site in Mandalay.

The next day was truly an experience. Amarpura , Ava and Sagaing are all former capitals of the old kingdom of Myanmar. I started in Amarpura, where the country’s largest monastery is located – Maha Ghandayon.  As I continued to walk I crossed the magnificent teak bridge of U Bein which is over 200 years old. It is the longest teak bridge in the world. Crossing the Ayeyarwaddy River I then headed for the picturesque Sagaing Hill.  This area houses an incredible amount of pagodas and monasteries and is home to over 3,000 monks and 100 meditation centers. It was so very interesting to see the monks and how they lived – their daily lives in all its simplicity. I watched as the monks cooked huge vats of food for their daily communal lunch and gathered together for the breaking of bread and prayer. It was like nothing I had ever seen before.

That afternoon I boarded a horse carriage in Ava and took a ride to the wooden Bagaya Monastery and the remains of the Royal Palace.

Ok now for the finale!! And what a phenomenal finale –  Inle Lake. This freshwater lake is Myanmar’s second largest and measures about 70km. Located at an altitude of 880 meters, the lake is also the highest in the country with a wonderful climate and fabulous flora and fauna.

Beautiful homes on stilts, farmers in  their boats cultivating small above water crops , fisherman doing one leg rowing  were a few of the sites I marveled. As my boat came closer to  the hotel I was to stay, I noticed we were actually floating through lotus blossoms  before docking. The hotel-which was  surrounded by a cluster of  cabin like suites on the lake (which I stayed in one) had spectacular views of the rice paddies , sunset and sunrise.  That evening, as I sat on my deck, overlooking the rice paddies, I was so relaxed experiencing such an idyllic setting.

My last day in Inle Lake was a full day trekking tour in the hills surrounding the Lake. My trekking guide, a young man ,who, when he smiled had teeth stained red from chewing betel , was an excellent guide. We started the trek through a village open air market  where we picked up some local fruits &vegetables(among other food items I hadn’t a clue) for our lunch . They we began our ascent. It was truly amazing! Once we were about halfway up (about 7 miles) we stopped at a small hut. The monk who lived here  took care of the small temple located not far from the hut. He offered us water and a place to rest – never speaking a word! The view of the lake was spectacular from this vantage point!

After we filled put hearts and eyes with such beauty we then proceeded on our journey. Upon reaching the top of the hill  I was invited to eat at my guides friends’ family home. I must say I was very cautious climbing up the ramp to the home (the house was on stilts). The family had a very simple lifestyle  and was extremely  friendly to me. We shared a wonderful home cooked meal. I must admit I didn’t know what  I ate but I do know it was scrumptious!

So my journey ended the next morning as I woke up at dawn to take the small boat from Inle Lake , which was about 20 minutes from where the car was waiting for me to whisk me off to the airport. Four changes of planes and approximately 24 hours later I was home, in New York, but I was still in Myanmar.

It was the absolute best!!!!